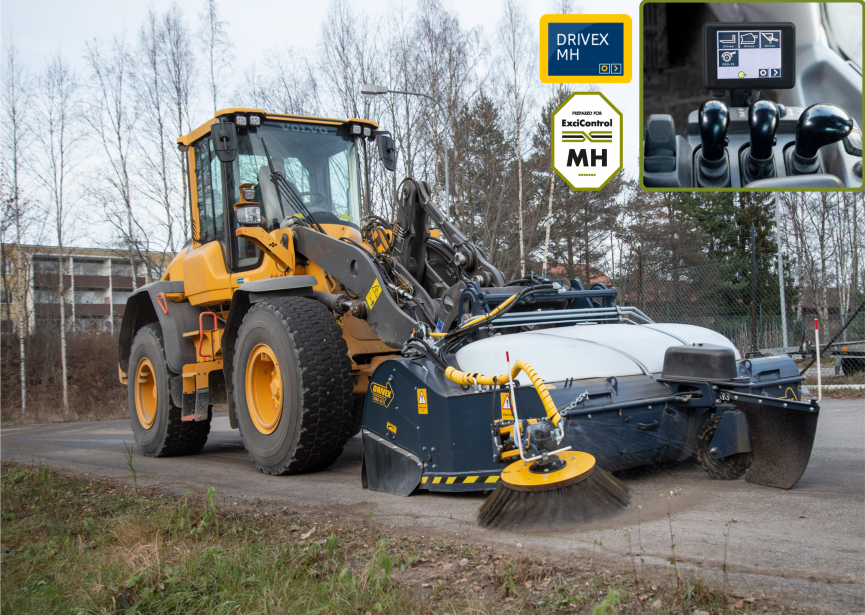 The two Swedish companies Excidor and Drivex have jointly improved the overall economy for many owners of construction machinery. By introducing the ExciControl MH control system in vehicles equipped with Drivex attachments, the benefits will be both great and many.

It was in the end of 2018 that it began. Excidor and Swecon was in the process of developing the control system ExciControl MH for Volvo wheel loaders. Around the same time, the collaboration between Excidor and Drivex began, which are also geographical neighbours. The result? – The customized control system Drivex MH (ExciControl MH), specially developed to fit Drivex absorbing sweeper DXU-25 and other attachments. In addition, all Drivex attachments are included as standard in ExciControl MH.

Always the right amount of material

Make settings such as:

One system for all attachments

The time with several different systems in the driver’s cab is over! ExciControl MH fits several different brands and attachments. Drivex MH is specially developed to fit with Drivex attachments such as sweeper, folding plough, sand spreader and fork stand. All attachments controlled with only one system, a feature not only appreciated by equipment workshops and throughout the industry, but it is also economical and uncomplicated for the end users/customers.

Excidor are not only responsive and accommodating to our needs, but they also have an awesome service

Savings through optimal use

The ExciControl MH system enables adjustable, hydraulic flows that result in less fuel consumption and less wear on the machine, as Drivex attachments are then allowed to be used optimally. For end users/customers of this solution, major benefits are offered:

The electronic company Excidor and the machine attachment manufacturer Drivex share both interest and vision, so a collaboration came very naturally. Together, they equip construction machines with quality attachments and reliable control systems for different machine types/brands/surfaces and seasons. Although the two companies are in the same state in Sweden, there are end users/customers spread throughout Europe.

Do you want to know more about Drivex construction attachments or Excidors control systems for mobile environments?

Drivex AB started its company in Edsbyn, Sweden in 1969. The following year, the founder´s two younger brothers joined the company, and the same families are still the company´s majority owners today. Since 1992, Drivex has developed, manufactured, and marketed attachments for construction machinery. All development, production, and distribution of the company´s products still take place in Edsbyn. Drivex currently has almost 50 people employed and sales of just SEK 130 million.

For over 30 years, Excidor have developed, manufactured, and marketed control systems, software, keypads, and electronics for flexible driver environments. Excidor´s solutions are available in, among other things, excavators, wheel loaders, railway applications, forestry machines, trucks, woodchippers and other mobile contexts. Products and control systems from Excidor are insensitive, easy to use and maintain and therefore increase the value of machines that are supplemented with such equipment.